A craft kit came in the mail... 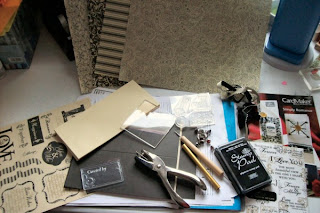 had all these goodies in it...well I guess you can say goodies...I probably wouldn't of bought them if I was at the store but since they came to the house and I had already opened it and it would cost almost as much to mail it back I figured what the heck and made some cards to include with my blog candy venture. Anyway here are 3 of them and I have another 3 that I will upload to another post later on. I did add some of my own "ingredients" to some of them and will try to list any extra's under each card.

colored with a red copic on the L

used my own black ribbon as their was velvety and I didn't like how it looked with this one.

Used some gold embossing over the black ink they sent.

So that's it for now - I canceled the kits with the bill this time so hopefully they won't be sending me more of them LOL! Funny thing is I don't even recall ordering them so ...HEY is one of you out there sending my name into places or something? What gives - CUT THAT OUT!!!!!
at 6:41 AM

Karyn, this are all fabulous creations!! Love the embossed on the black!! Very cool!! Fab kit!! ;)

Fabulous creation! That happened to me one time and I told them I didn't order it. I think sometimes they just get your name on a mailing list and you become the next Victim!