DISCLAIMER: This was NOT my original idea!
I just thought it immensely cute and ran with it this year!

I alluded earlier that I was kidnapped my Peeps and I was serious! LOL I had several emails asking if all was ok, some thought I meant "peeps" as in My People (slang term) others were wanting to know how in the world the Marshmallows could kidnap me...well the Marshmallow thinkers were right on track.........
I hope you all had a very Happy Easter. I had a very busy few days right before Easter because I decided to make a few "Peeps in a Jar" ! These sold like Hot Cakes this year and I was busy most every evening working on them. I will start earlier next year!

I made toppers for mine that had a couple layers and the middle opened up (the scalloped part) and the recipe was inside there. Coloring all depended on whatever ribbon I had that was long enough and Springy looking :)
Stamps used were from TAC and all coloring was done with my Copics. Edging was done with various colors of Palette Inks to match the ribbons. 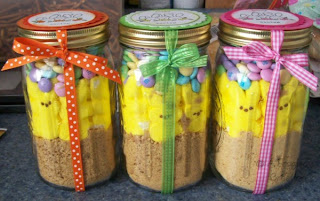 They smelled like Golden Grahams my dd said and they tasted pretty darn yummy too! Yep of course we had to try it - did that first before making them for others I won't sell something that tastes YUCKY!
SIDE NOTE: they are super Yummy warm with a scoop of vanilla bean ice cream on top!

Here are 2 close up pictures of the toppers

I used my Slice to cut a 3 1/2 circle and then my Giga Scalloped Marvy punch to make the scallop, leave a bit off the punch so you make a card so it can open for the recipe to be inside. both the recipe and the top decorated layer were cut with my Mega Marcy circle. These were in Wide mouth jars so jot that info down if you want to know sizing without having to mess around. 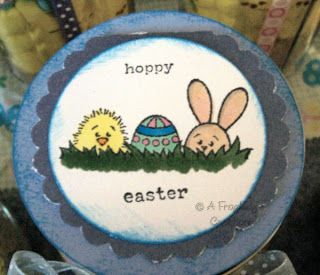 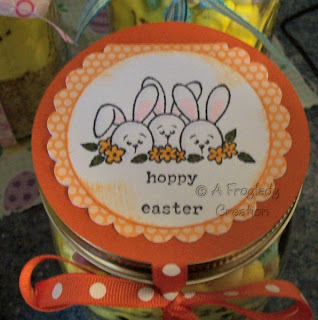 Yeah I know you are all going ok tell me how to make them, what's in it...Well as I stated from the get go - this is NOT my idea but you can find it here:
Peeps in a Jar from Susanna Boyd of http://www.cardoftheweek.com
and it was featured in the The Daily {Paper Craft }Planet, Volume 12

So thanks for looking at my Peeps in a Jar!

**If anyone would like the WORD doc I made with the recipe just shoot me an email so I can send it to you. They are sized to cut out with the Mega Marvy circle punch.

EDITED TO ADD: You can also find the recipe document uploaded here.
at 6:47 AM

I can smell the sweet all the way in IL! This is fabulous! Great idea and beautifully presented. I'd buy 'em up before anyone got a chance to even smell the sweet!!!! Just gorgeous! And thanks for sharing the "recipe".

OMG!! Now these are just the cutest thing ever!! I love this idea and how sweet it looks dressed up!! :) TFS! Hope you had a great Easter!

wow! what a yummy idea!!!!! Thank you for sharing and yes I would love for you to send me the file so I can save it to make them nxt year ;)