Everyone likes a challenge right? Well not always sometimes they are downright scary! The challenge for round 2 of the Stampers Quest Search for the Trail Master was to make a Scene. Hey I can make a "scene" but I don't think it was the type of "scene" they were talking about!

I was thankful that I had branched out a bit in the sets I have recently picked from FireCracker Designs by Pamela. She has some awesome things to make a scene with and all of the sets can mix and match to get what you want. Sometimes though that is the problem figuring out what you want! I tried to make a nice background and then figured I could stamp or layer up on it, wasn't working! I tried to make the scene first and then mask and brayer over for the background - not exactly what I had imagined! I finally ended up with this which I was kinda ok with but not too keen on the sun. 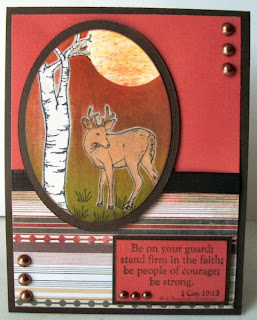 I rather liked my copper pearls on there but hadn't really paid attention to the "flow" of the card so putting them vertically while using them horizontally on the sentiment and horizontally lined paper didn't add up real well! However at the time I was done I was just glad I had a finished product. Well the more I kept coming back to it I was like nooooooo So I went on to a whole nother card which I will share another day with you. I decided to take a friend up on her offer for critiquing because I wanted this (and the other one) to be better - they needed more wow and I plainly wasn't seeing it! She was kind in that she didn't say YUK straight up but also kind in offering suggestions as to ideas of what to change and why. I listened (well read the chat LOL) and took notes and then went off to play again with my cards and revamp them to get something with a little more WOW to them and that worked better...here is the result... 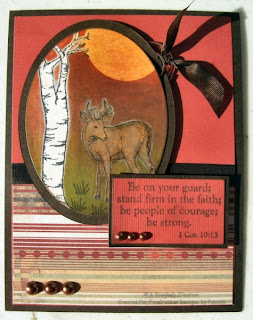 See I liked my pearls too much to leave them totally off but I did remove them from vertical to horizontal so they matched. I also added a clippo and a piece of coordinating ribbon to the upper right of the card. Moved my sentiment up a tad higher too (and yeah when I went to remove things I had to swap out the patterned paper piece cause I ripped the other one!) So what do you think? Changes for the good? Changes too much? Changes not enough?

I ended up NOT choosing this one for the contest because in the adding to the sun color I thought the deer ended up mottled looking and just wasn't the best of the 2 cards I had then.

I like the first one better with the brads at the top. thew deer looks better also. also the scene looks beeter likes a sunset. it is just a better card