When I first saw the Chocoholic Stamps from Elemental Doodles I knew they would be fun to use for things other than cards too! Today I am sharing something I made.

I saw this sign at Joann's and picked it up thinking I want to see if the Scent-A-Mist's will work on things like this. So when I got home I sprayed just the letters with the Chocoholic Scent-A-Mist. Mmmmmm I was messaging with a friend later and told her that spraying chocolate scent in the craft room at something like 6 AM was not the proper way to start off a Saturday because I was already wanting chocolate since every time I stepped near the room that was all I smelled! We laughed about it but I DID have to go get chocolate later in the day I couldn't take it anymore! LOL

I then used the chocolate "splats" to randomly stamp with Memento Rich Cocoa Ink all over the letters and the base.. It was dark enough that it contrasted with the Scent-A-Mist on the letters.

For the base part I used Ranger Distress Crackle Pain in Antique Linen. Look at the close up you can see the crackle. I didn't put it on real thick so the crackles are just small but enough for the look I wanted. 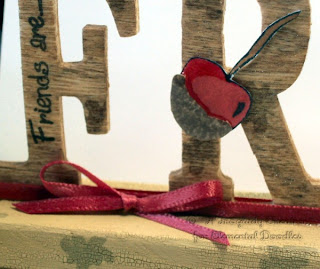 I used the wording from the stamp set to stamp along the sides of the letters it says:
"Friends are the chocolate dipped cherries of life!"

I then had stamped and colored and assembled some chocolate dipped cherries to use on the wood too. I attached them with red line tape. Can you see the cherries are all shiny too I used Crystal Lacquer on the top of them. As a finishing touch I added the thin band of ribbon around and tied between the F and R as it was a large gap and looked funny with nothing there :) I did use Tombow MonoMulti Glue under the ribbon so it would stay snug to the wood too.

So as you can see the stamps aren't just for cards and the Scent-A-Mist isn't just for paper! Use your imagination and have fun!
hugs,

I love your sign. It came together so nicely. What great ideas to try!

This is fantastic!! sounds like your room will be smelling yummy for some time!!

WOW!! Karyn, this is just really awesome!! I love your sign and your chocolate covered cherry!! ;) HUGS

This is so fun!! Very nice job!

LOL i think waking up to a chocolate smell at 6 am is wonderful! the sign is cool. Someones gonna love it!