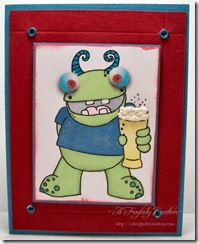 he he isn’t he scary! I don’t think you ought to be accepting that bubbling drink from him but then again it might be pretty delicious!

This image is from PollyCraft and is actually called Beer Monster but I don’t much care for beer so I colored over the shirt with metallic pen…had I been thinking I could of erased it prior to printing it since it was a digital image LOL but yeah like I said HAD I BEEN thinking :)  I also added some puff paint to the foam on the drink and I played with the eyes too!  I used a tube from PSP that I had with eyes and manipulated them to cover the other ones and add another dimension of fun to this image.

Hey Karyn. Pretty cute for a scary guy. I love how you used the puffy paint and the cool eyes. Way to use your imagination.

P.S. I'm having a giveaway ~ hope you come enter.

this is SO FUN, Karyn!! LOVE how his eyes turned out!! So cute!